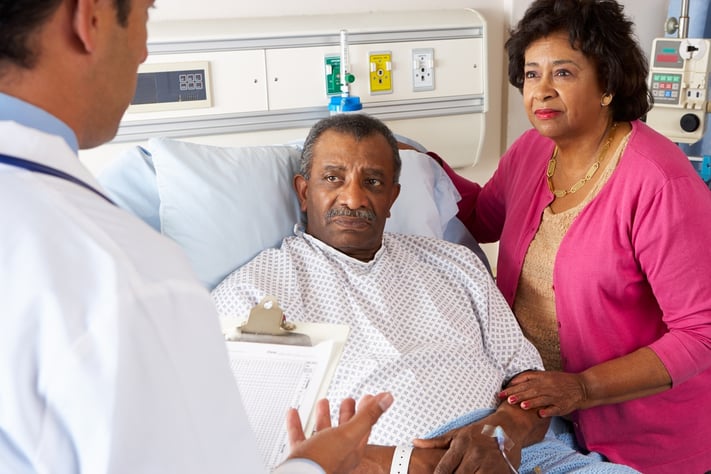 Perceived discrimination, based on race, gender, and other factors, causes patients to distrust the healthcare system and medical practitioners. They are then less likely to seek treatment, and less likely to follow through on medical advice. In response to a recent study on this topic, Quality Interactions co-founder Dr. Joseph Betancourt published an editorial in the Journal of General Internal Medicine (JGIM).The study, by Nguyen et al., found that rates of perceived discrimination in healthcare declined among black patients between 2008 and 2014. While this could be promising news, Dr. Betancourt argues that it is not time to celebrate yet.

There are two important points worth making about the Nguyen et al. study. To begin, the survey period of 2008 to 2014 unfortunately represents a different context than the one we are living in today. Divisive, even racist rhetoric from the highest echelons of our political sphere has unearthed a new reality, one which many hoped we had moved beyond. The “post-racial” era supposedly marked by the election of this country’s first African-American president has swung with the force of a 10-ton pendulum. People, and patients, feel emboldened to say and do things that in years past would have been unheard of and considered racist. I believe that if we were to monitor perceived discrimination today, we would see a new spike among blacks that would blunt the improvements this research identified.

Dr. Betancourt's second point focuses on social determinants of health, and the historical context for how communities of color became so deeply entrenched in environmental conditions that breed poor health and limited health resources. The healthcare system and practitioners are easily perceived as part and parcel of the stark reality of systematic discrimination. Or, as Dr. Betancourt concludes, "reality drives perception."

Dr. Betancourt, however, remains hopeful that we can actualize lasting improvements around patient perceptions—fueled by the reality—of equitable care. This will require “courage and conviction on the part of caregivers and health care institutions” to take directed action. Beginning steps can be practical: understanding the history different populations, developing empathy for their experiences, and engaging patients in candid communication about discrimination.

A simple question such as “have you ever had a bad experience in health care I should know about,” with some time for response, can almost immediately shed light on a patient’s perspective related to trust and treatment in health care. A question like this can be a powerful tool, as patients of all stripes may have had a bad experience that has made them mistrustful and that informs their response to us, our colleagues, and our health system, and undoubtedly their health beliefs and behaviors. Finally, once we open that door, we must demonstrate that we are different, and provide strong reassurance to that effect. We have cared to ask. We understand. We want a fresh chance. We commit to open communication when patients feel mistrustful or concerns emerge. Evidence demonstrates that people can be mistrustful of organizations and institutions, but as individuals, we can break through and build trust.

Read the full text of Dr. Betancourt's editorial in JGIM.

What is your experience with perceived discrimination in healthcare? Let us know in the comments.